Born in Wooler, Ontario, to Alfred and Eleanor Purdy, Alfred (Al) Wellington Purdy (1918 -2000) had a long and prolific publishing career. A man of many trades, Purdy was first and foremost a poet. After selling his first poem at the age of fourteen to his high school magazine for one dollar, he overcame a turbulent early career and emerged as one of Canada’s greatest populist poets. Hailed by the 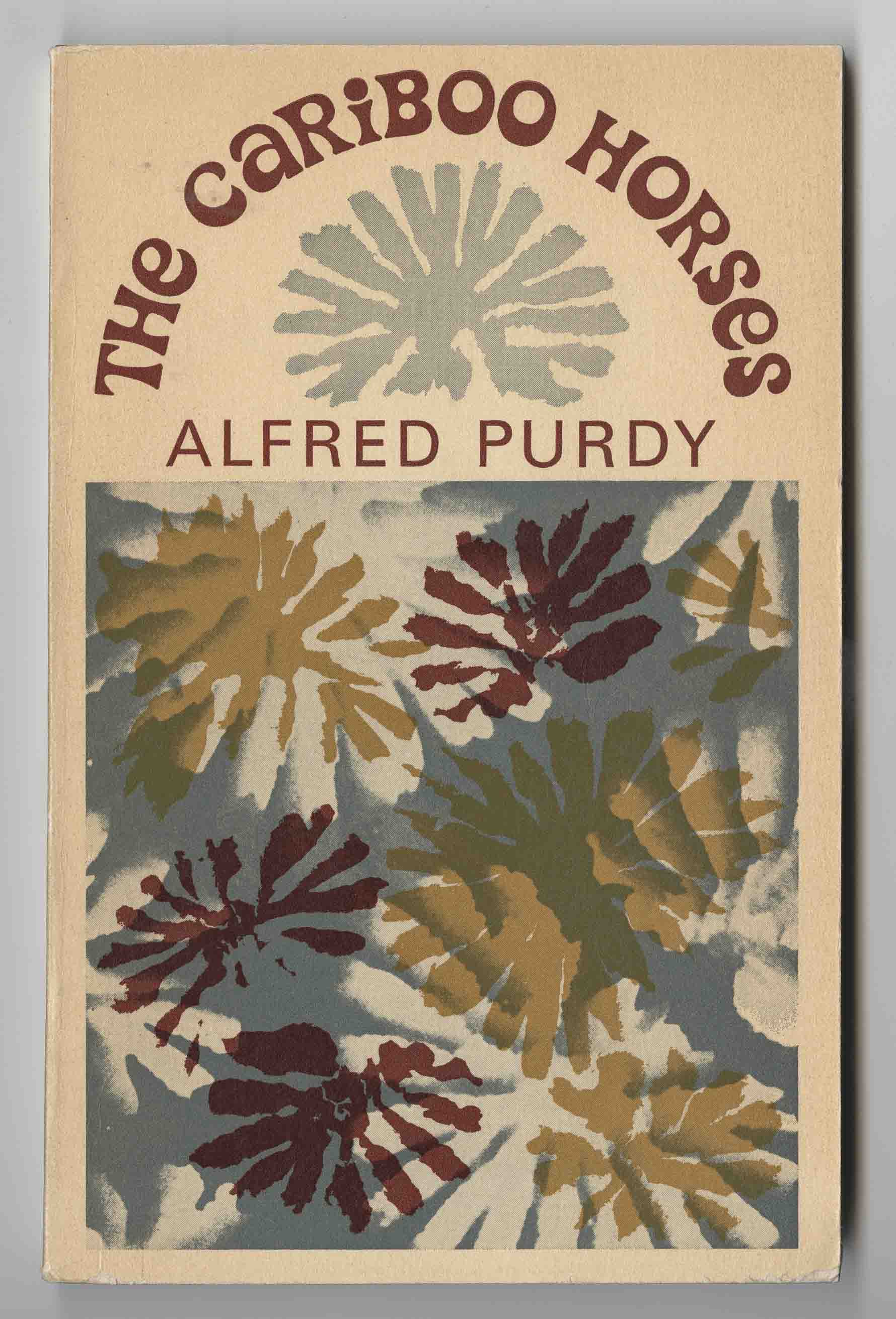 League of Canadian Poets as “The Voice of the Land,” Purdy published over thirty collections of verse – winning two Governor General’s Awards for The Cariboo Horses (1965) and The Collected Poems of Al Purdy, 1956-1986 (1986). He also completed two memoirs, a novel, four books of correspondence, several articles, essays, reviews, two plays, and some short fiction. Along with Milton Acorn, he published a short-lived magazine, Moment, and also edited ten anthologies of poetry as well as the political anthology, The New Romans: Candid Canadian Opinions of the United States (1968). 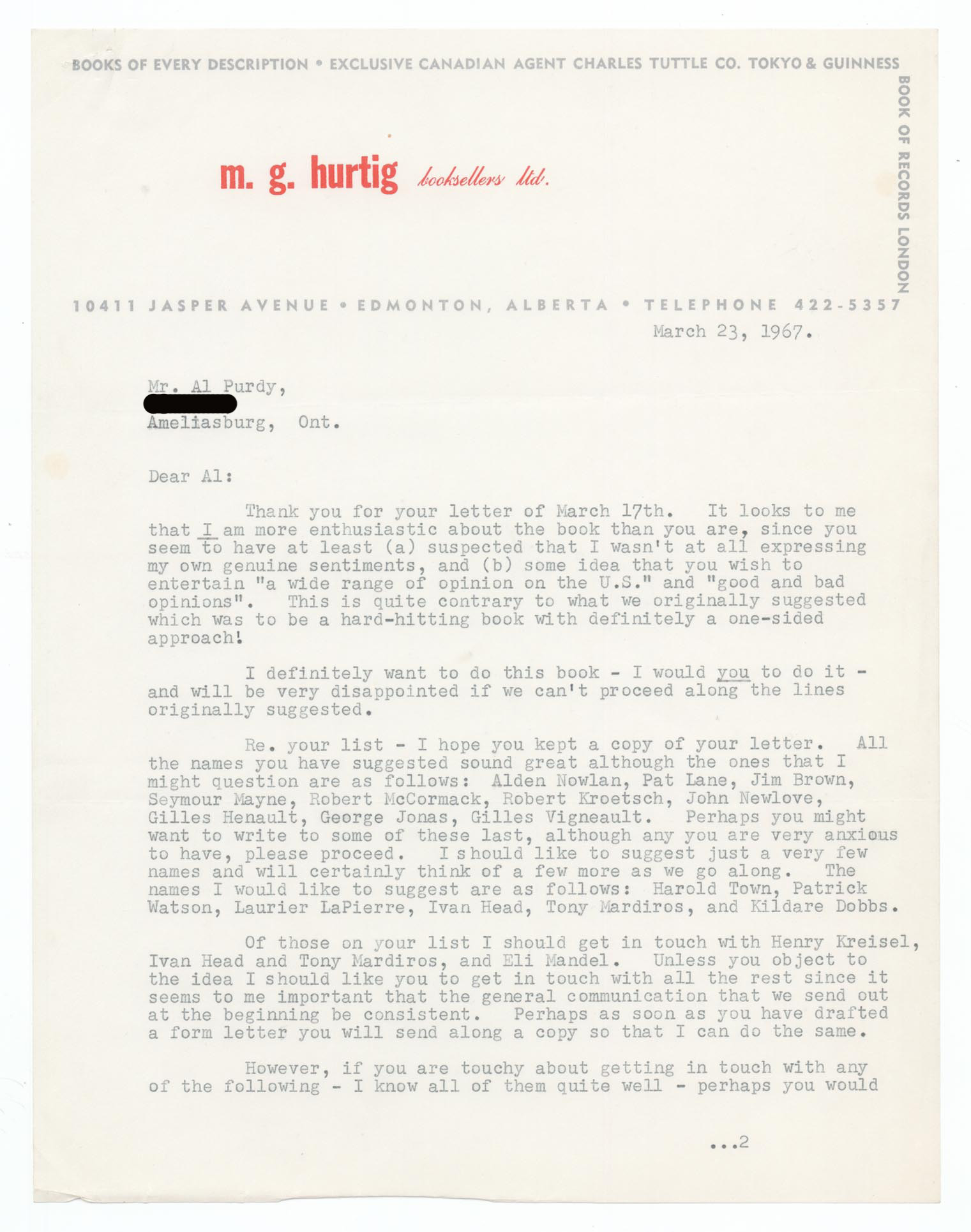 publisher, activist, political candidate, and author – and complained to him about “the mistreatment of Canada by the United States.” Purdy proposed his idea for a book of “Canadian opinions of the U.S.” and Hurtig offered to publish it. In a letter to Purdy, Hurtig outlined a plan to enlist famous poets, writers, and politicians to contribute short pieces to the anthology. As editor, Purdy would receive a ten percent royalty. 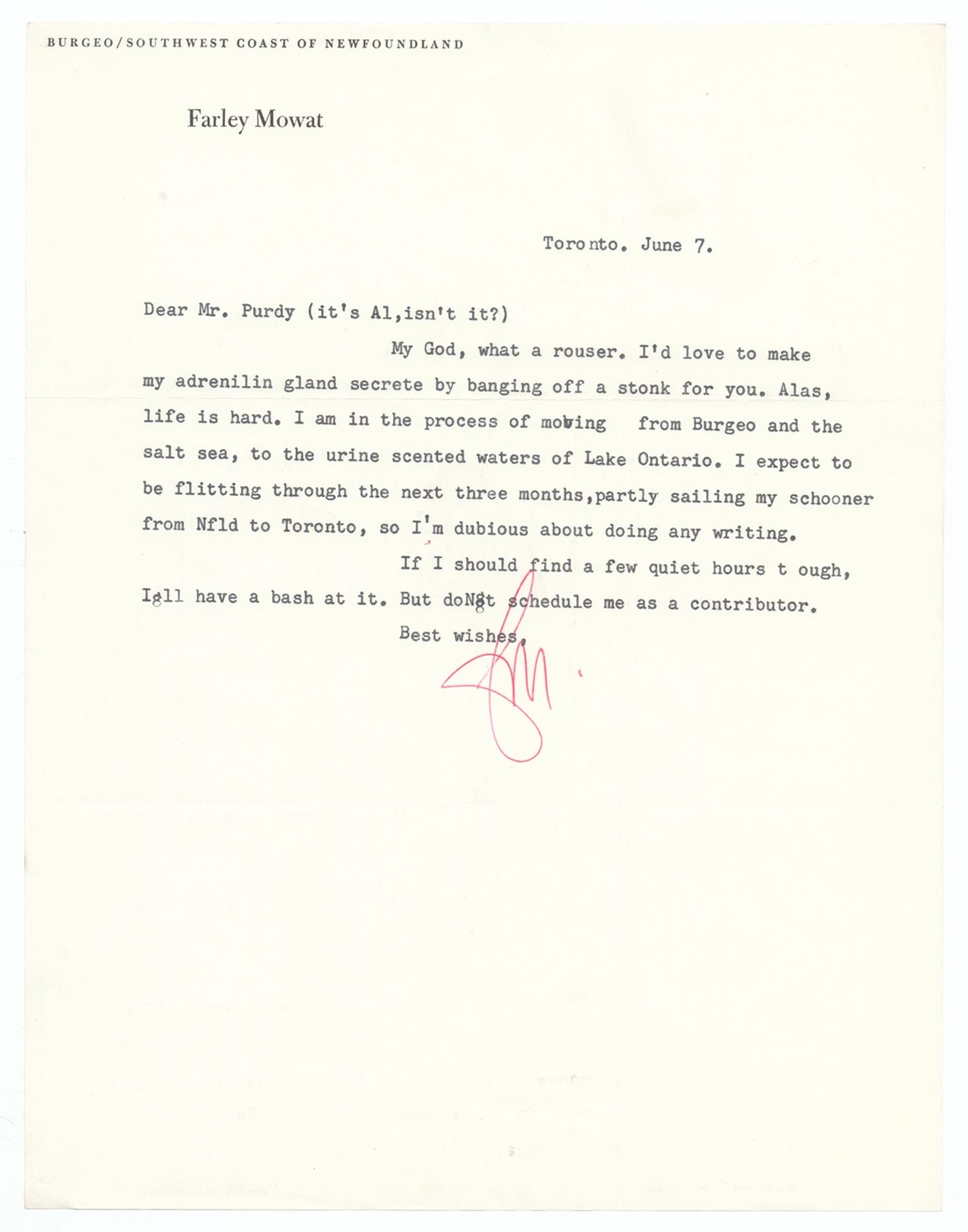 From 24 May through to 11 December 1967, Purdy sent letters to various writers asking for submissions. Some writers accepted the invitation with a brazen response. Mowat’s reply to Purdy opens, “My God, what a rouser.” While some of those who were invited politely rejected Purdy’s request, others questioned his intentions. For instance, Frank (F.R.) Scott asked, “Are you seriously committed to this proposal? I can understand Mel Hurtig wanting to get into the publishing game, but I doubt if he knows exactly what he’s doing.” Nonetheless, Purdy continued to seek and receive contributions.

While most submissions were specifically written for the anthology, Purdy and Hurtig used some pieces that had been previously published, for which they had to 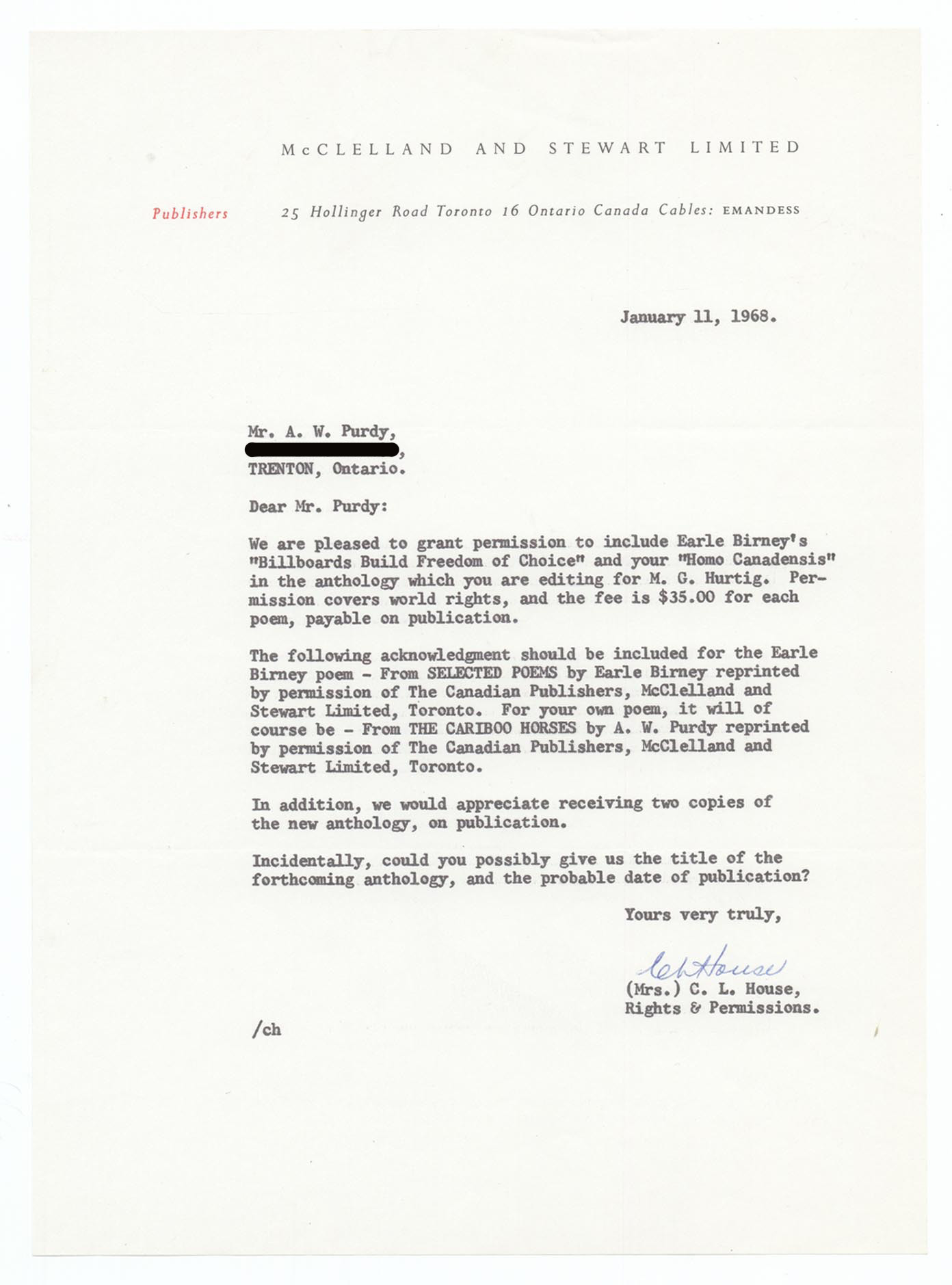 pay permission fees. A notable example was Earle Birney’s poem, “Billboards Build Freedom of Choice,” published by McClelland & Stewart (M&S). Early in the project, Purdy had contacted M&S to ask for permission, which was granted for a fee of thirty-five dollars. However, Purdy forgot to inform Hurtig of the cost, and, according to a letter from M&S to Hurtig dated 21 May 1970 (almost two years after the publication of The New Romans), M&S had yet to receive payment. On receipt of the letter, Hurtig submitted the fee.

As the project evolved and Purdy received the last of the contributions, he worked on the introduction for the anthology, writing over ten drafts. Purdy insisted that Hurtig not hire a professor to correct some of the spelling and grammar in the anthology, having been urged by a few contributors, such as Mowat, to take this approach. In a letter dated 15 November 1967, Mowat wrote: “By the by, you may correct my spelling, but if you alter so much as a comma of the text I’ll sue the ass offen [sic] you.”

After the first galley proofs were produced, Hurtig printed 40,000 promotional bookmarks to hand out to potential pre-order customers, along with posters and other advertising material. For the cover art, Hurtig contracted Vancouver Sun editorial cartoonist, Roy Peterson. Purdy and Hurtig aimed for, and met, a publication deadline of September 1968.

They had hoped to receive orders for 10,000 advance copies. In a letter dated 2 July 1968 to Purdy, Hurtig expressed his surprise that advance orders already totalled 10,700. Later that month, Hurtig wrote: “don’t have a hemorrhage, but our advance is now twenty thousand, six hundred and seventy-one copies!” Many of those orders were returned: two years after publication, Hurtig wrote to Purdy: “at one time we were up in excess of 40,000 copies but as you know the returns came back.” By July 1973, they had sold over 20,000 copies. By the end of 1973, five years after the original publication date, 22,581 copies had been sold. 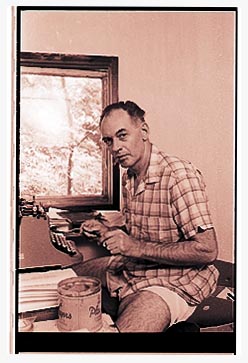 The anthology received mixed reviews, and despite Purdy’s efforts to expand its market internationally, he had no success attracting a publisher in England. The mixed response and high sales of the anthology underscored Purdy’s ability to “stir things up.” The entire project revealed Purdy’s deep nationalist sentiment. Although he would go on to edit poetry collections, The New Romans would be his first and last editorial project of a political nature.

Queen’s University Archives hold extensive material relating to The New Romans. While several other universities have Purdy manuscripts, the biggest collections are at the University of Saskatchewan and Queen’s University. Through his large body of work and many publishing endeavors, Purdy has proven to be one of the most profound authors of his time, a true poet of Canada’s land and people.