Canadian translator Wayne Grady surprised an audience of Norwegian translators during their annual general meeting when he pointed out that not only do Canadians translate other Canadians, but the government pays for such translation work. Unlike most countries throughout the world, where the cost of translation is borne by publishers, the Canadian government helps pay 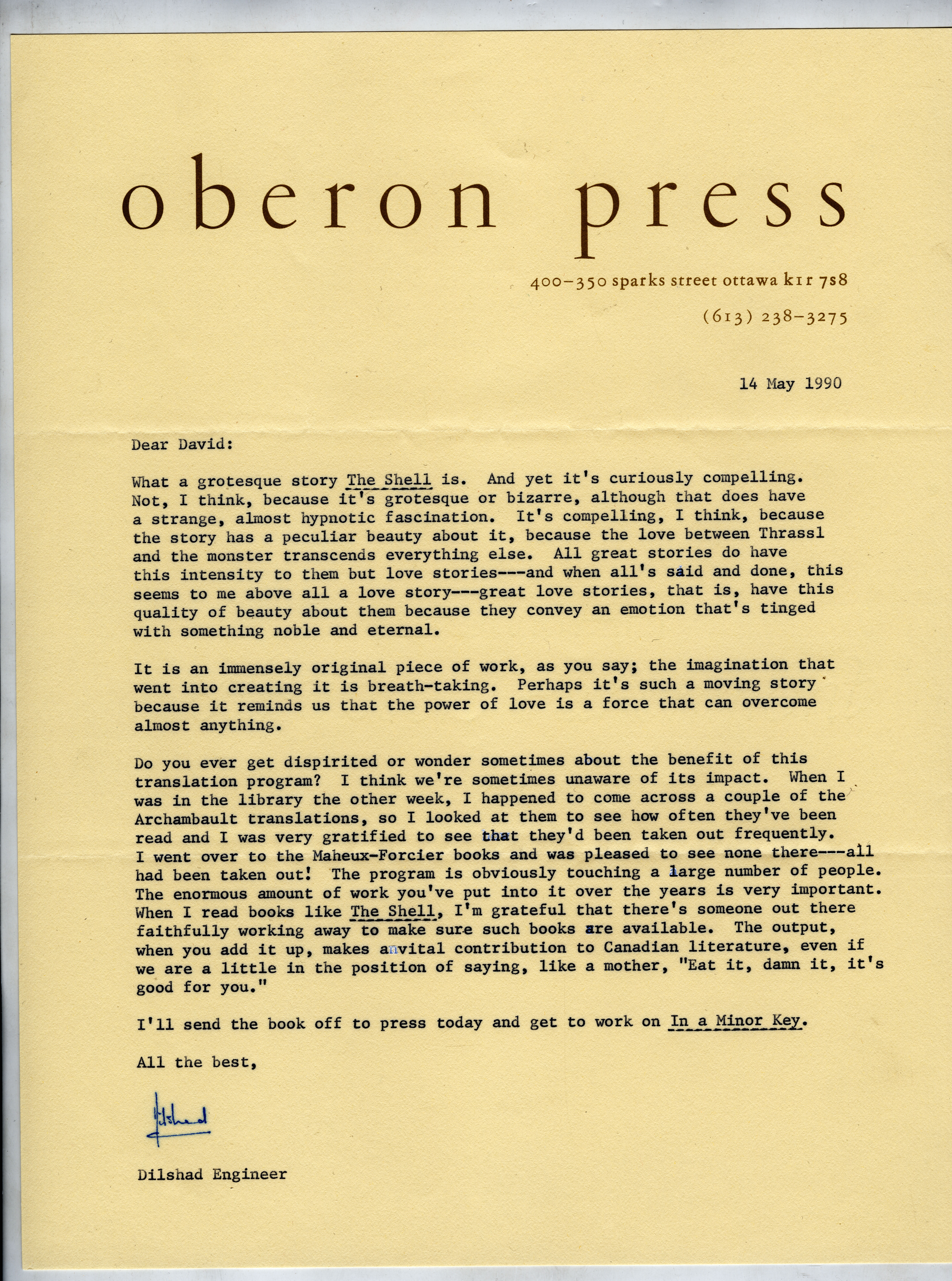 Canadians to translate other Canadians. The Canada Council implemented a translation grant program in 1972, and since that time Canadian translators of literary works, and their publishers, have relied on these subsidies. The grant system is thus important not only to those who do the translations, but also because it allows Canadian publishing houses to risk publishing texts they may not otherwise have wanted to pay to have translated. The grant system thus produced an important corrective to the lack of translation work occurring in Canada during the early twentieth century, and has led to a flourishing field of scholarly work on the theories and practices of translation work in Canada.

Although exploration journals and political proclamations were translated widely during the seventeenth and eighteenth centuries, literary translation in Canada 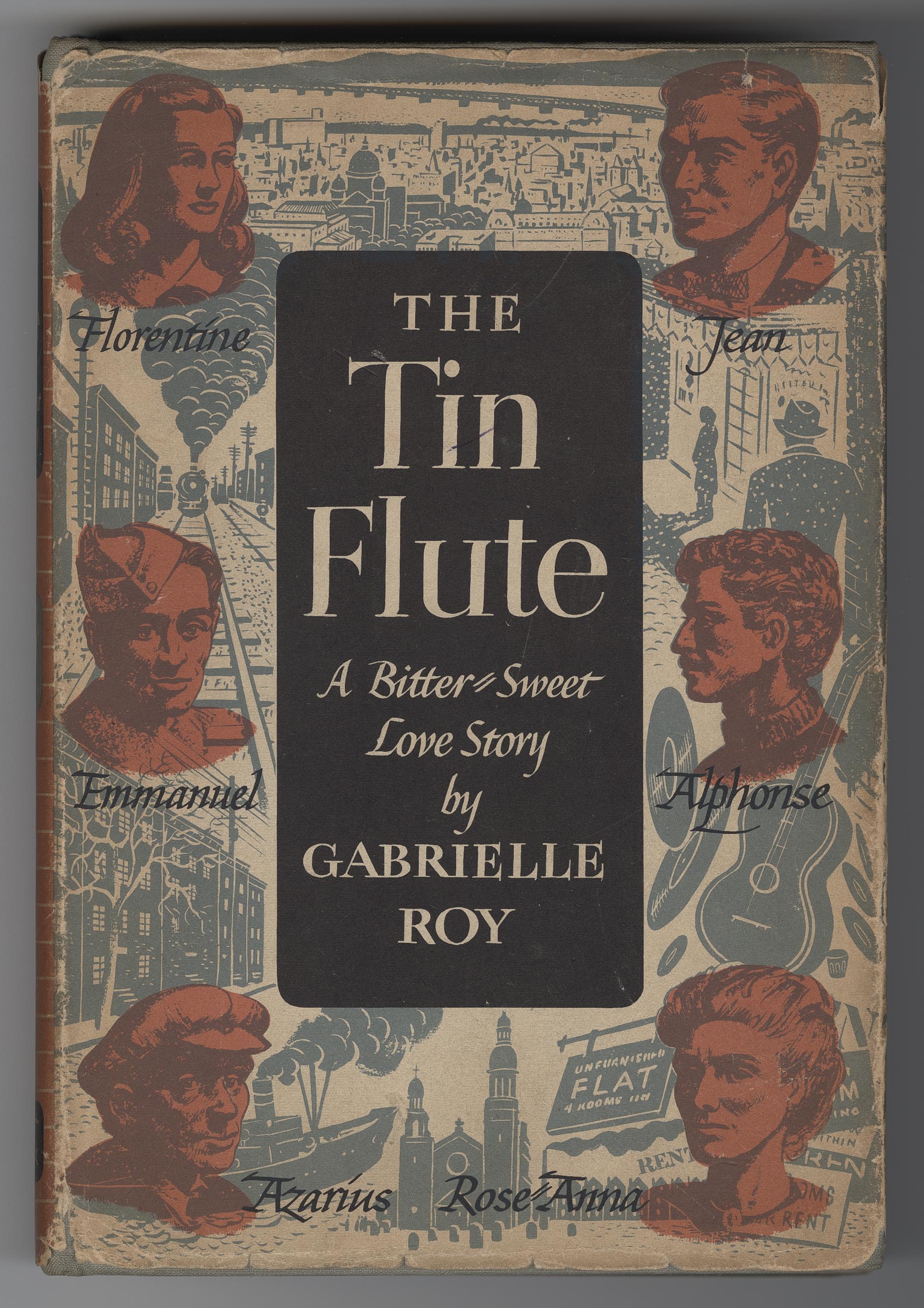 Although translation of Canadian texts is seen as an important element in “bicultural” Canada, the Literary Translators’ Association / l’Association des 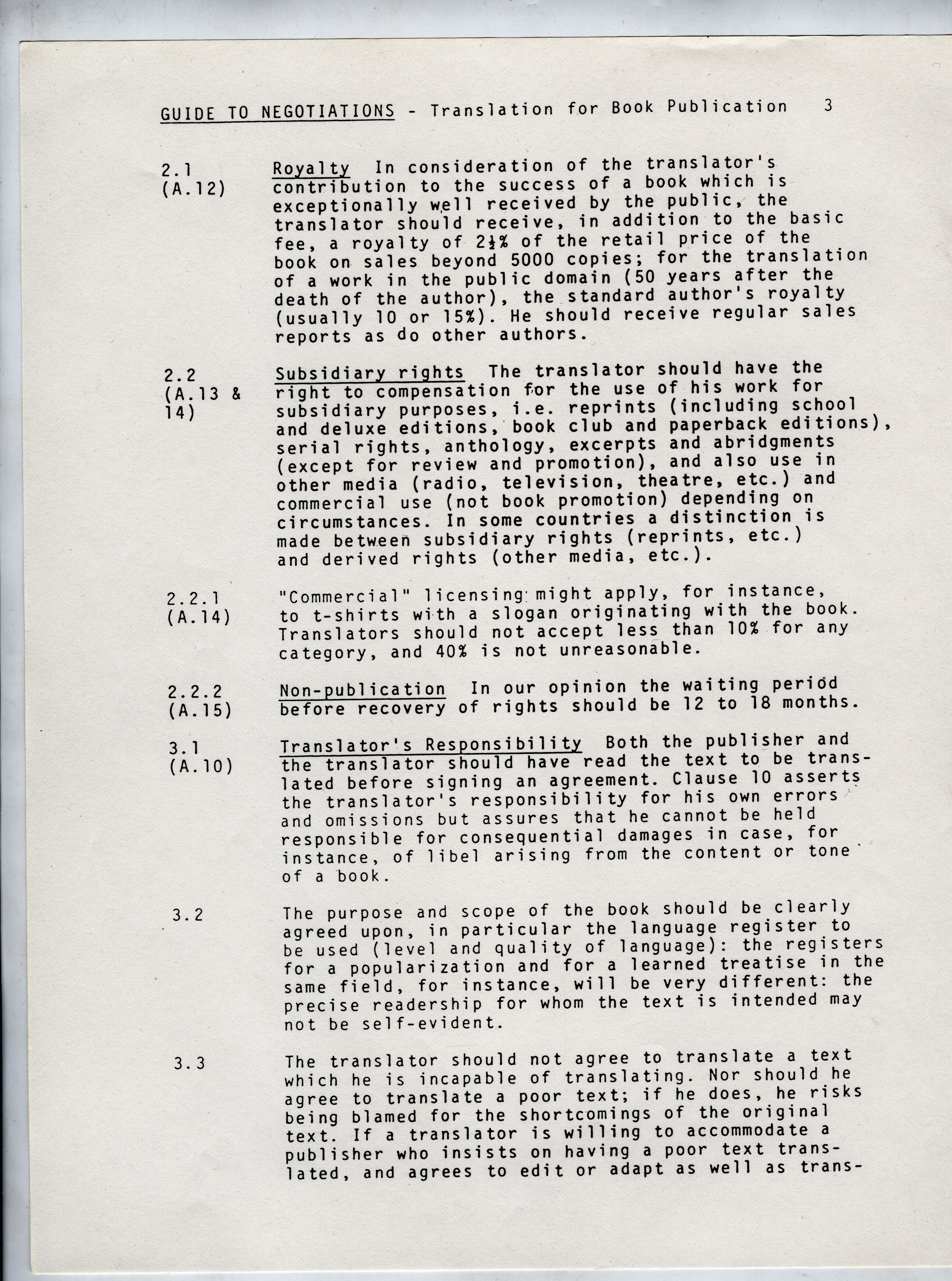 traducteurs littéraires (LTAC/ATTLC) was formed in 1975 in order to generate a unified voice for all translators working within Canada. The LTAC/ATTLC played a significant role in calling for more recognition of Canadian translators and arguing for the importance of translation within Canada, from producing contractual agreements for use by translators when negotiating with publishers and authors, to creating awards to recognize Canadian translators for their work. Today, due to the work of organizations such as the LTAC/ATTLC and its members, translators are much more prominent in the publishing field, and are honoured through awards administered by such bodies as the Canada Council and the Governor General’s award for translation. 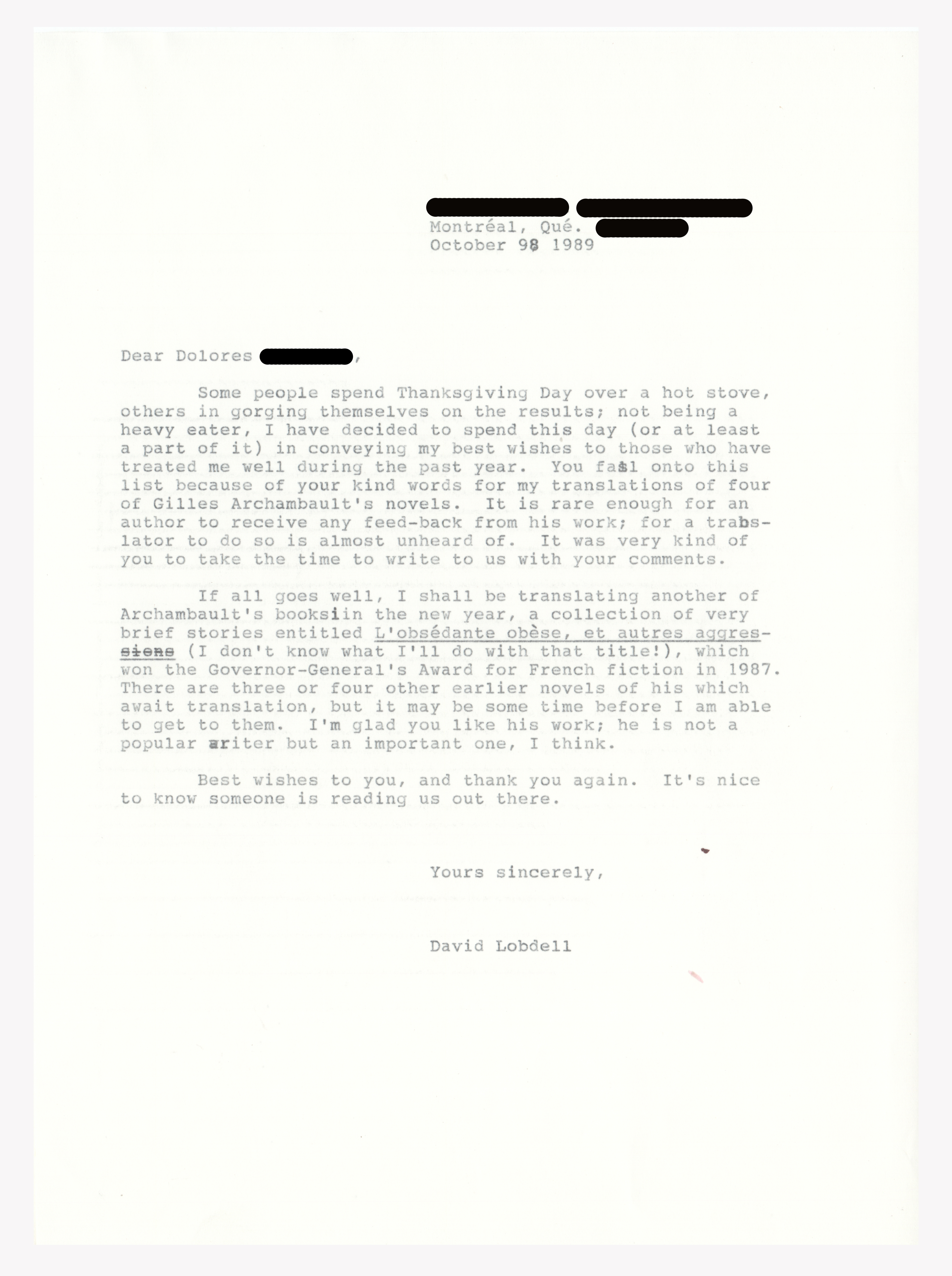 unique perspectives on the process of how translators have been recognized by other writers, the reading public, and translation communities in the latter half of the twentieth century. As an example, Lobdell once received a letter from a reader of a Gilles Archambault translation expressing her enjoyment of the translated text. She explained that since discovering the translation, she began to notice Lobdell’s name on other books, and had purchased them simply because she appreciated the quality of his work. This recognition of the translator’s name was, in fact, a contentious point for translators and publishers in Canada. Correspondence between Paul Wilson and his publishers reveals Wilson’s desire for more visibility of his name on the covers of his translated works. Wilson’s files also evince the difference between publishing translated texts in England, as compared to Grady and Lobdell’s experiences in Canadian publishing. This is especially true of the financial remuneration received by Wilson, and the highly politically charged elements of the texts he chose to translate. The documents of the three translators show the process of reforming the work of translation in Canada in order to produce a more accountable system for publishers, translators, and authors alike.

Documentation in the archives of these three Canadians shows a spectrum of experiences within the field. From copyright issues, aesthetic and poetic representations, financial agreements, literary activism, theories of translation, 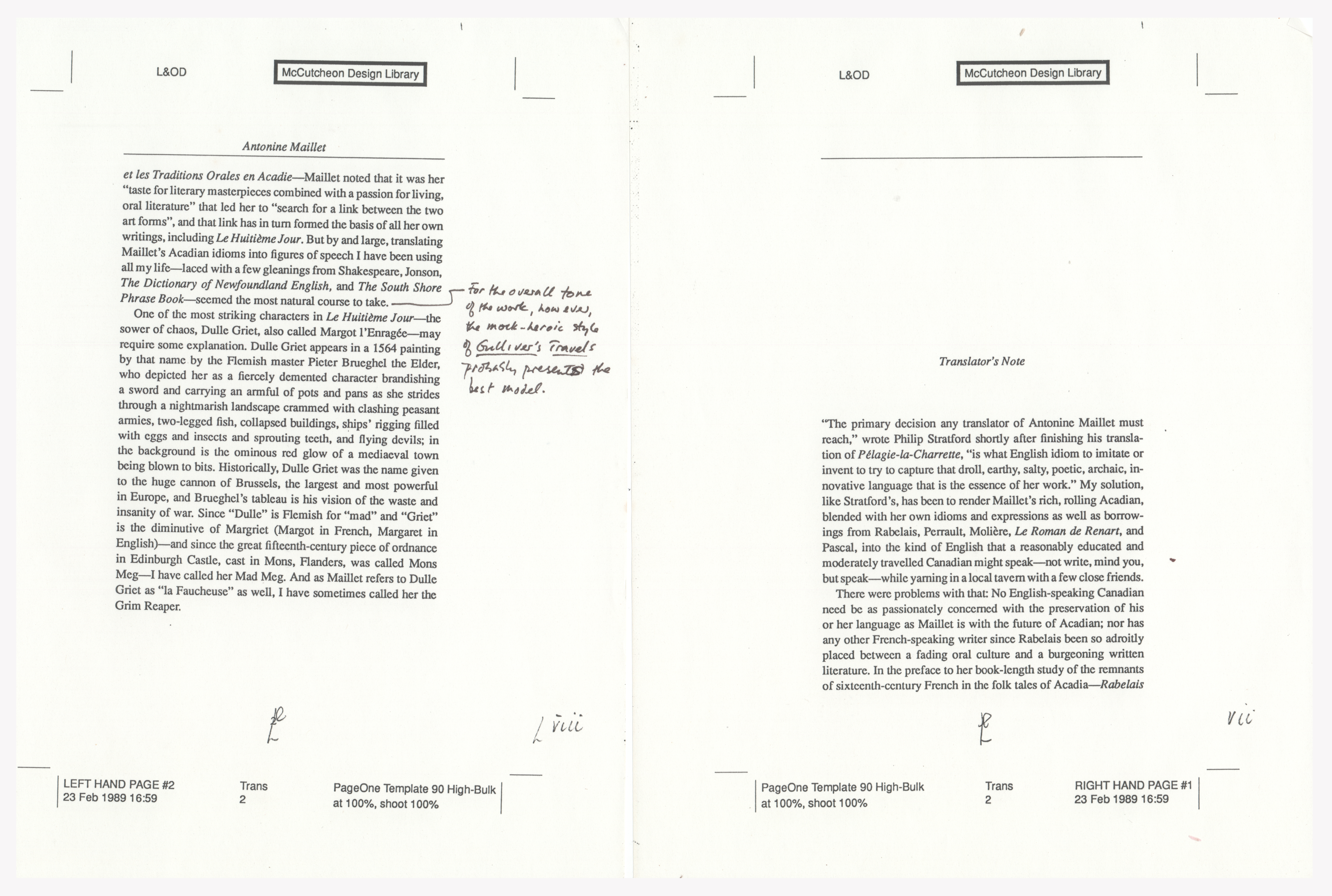 and publishing contracts, the papers express a varied and divergent process of translating texts from both within and outside Canada. The growth of the translation industry in Canada has led translators to extend their choice of texts beyond Canada’s borders, and the rise in demand for world literature has led to the translation of texts that the Canada Council does not fund translators to produce. Thus, translators such as Wilson have sought publishing houses overseas that will finance such work, and Wilson’s move to publishers outside of Canada shows a demand for a more pragmatic and extensive translation program within Canada that better serves the multicultural dynamic of Canadian audiences. The manuscripts and notes of these translators also show divergent philosophical and literary approaches to the act of translation 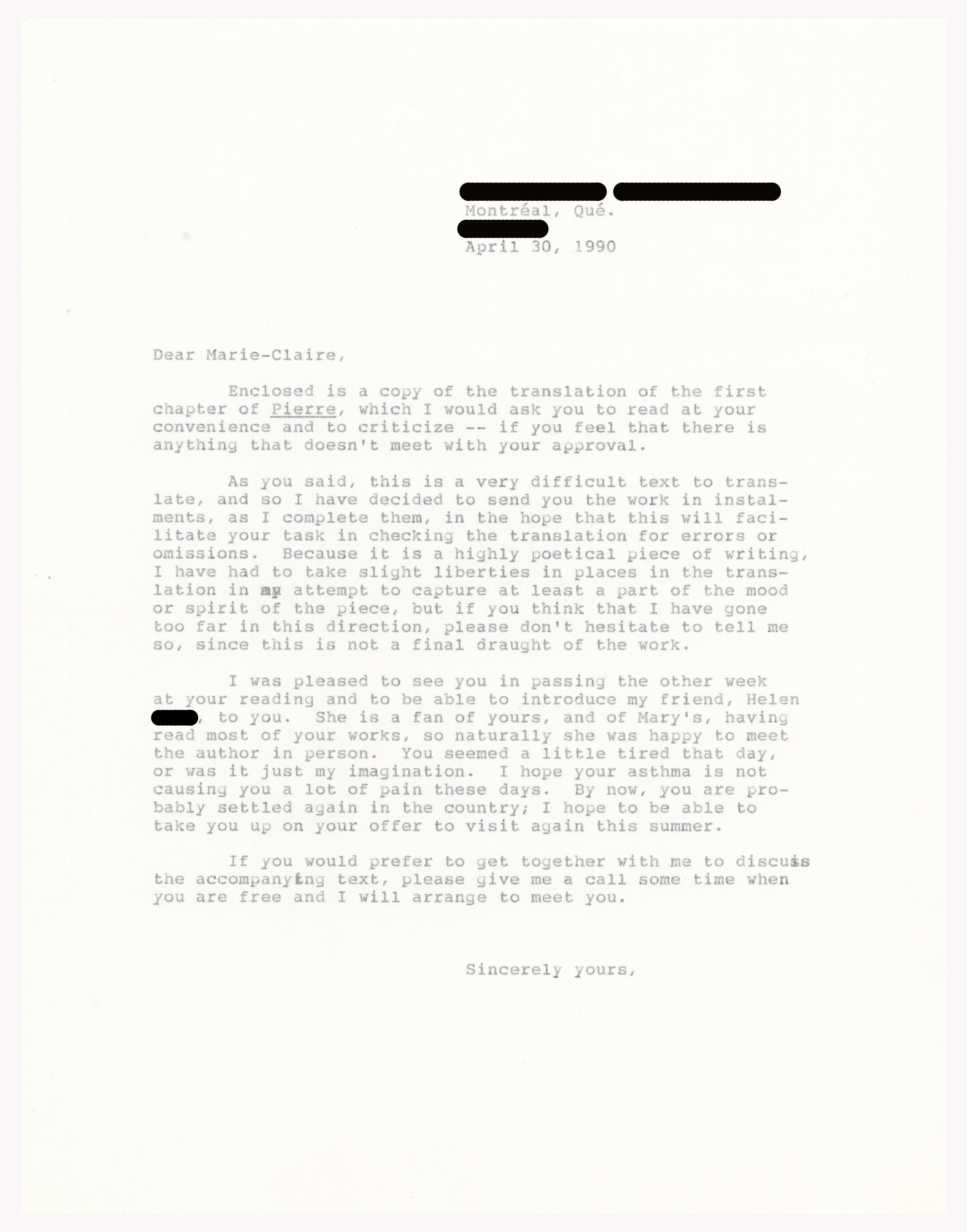 itself. There are now a number of translation programs in universities such as Concordia, Glendon College, Laval, University of Ottawa, and the Université de Montréal that deal exclusively with translation studies. Wilson, Grady, and Lobdell’s papers reveal different lexical and poetic choices that shape the reader’s experience in unique ways, and form the background to the ideological, cultural, and political effects and choices of translations. The correspondence between the translators and the authors they have translated extends the theoretical and aesthetic aspects of translation by showing varying experiences of critical engagement with an author’s work, the translator’s political voice, and the need, or perhaps desire to reproduce the tone of a work in another language.

—. Bibliography of Canadian Books in Translation: French to English and English to French. Ed. 2. Ottawa: Humanities Research Council of Canada, 1977.